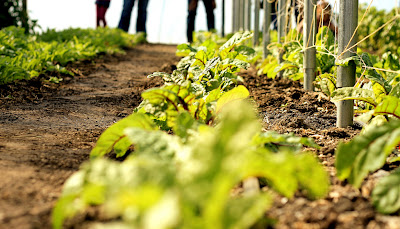 Next to being a tech geek my biggest passion is sustainability, mostly in food production and consumption. To that end my favorite event in Iowa is the "Farm Crawl." Eight unique, sustainable family farms southeast of Des Moines that open their doors to the public to tour their operation and get to know their local farmers.

When my wife, Marieta, and I moved back to Iowa the only way we could easily obtain organic food was by becoming CSA members and learning more about farmers in our immediate area. Thanks to social networking it's considerably easier then say 10 years ago but the Farm Crawl is really a blessing. Anyone can say they do things in a sustainable way but you can't really know for sure until you see their operation for yourself.

Now the tech connection. The past two years I've taken a video camera on the Farm Crawl. 2009 it was my little Canon Elura (bogus handicam dealie) and put together a little preachy piece about sustainable farming. 2010 I brought along a Canon XH-G1, basically I meant business. I shot interviews, broll, went to 4 farms and had all intentions of putting something together right away.

I didn't, up until last week. A year ago I wanted to put together something similar to 2009; something editorial on the importance of farming reform and the successful models out there. Well I've kind of chilled out and found a more enlightened ideal for the power of web video. So without further adieu...


In the end my basic goal was to let the farmers tell their own story and make the viewer feel a personal connection with them. That is really my goal for all web video. You can get a sense of who a person is and what they're about from reading an article, but when you see them there is no hiding a personality and connections can be made almost instantly.

Professionally I'd love to move into the world of online video promotion for local businesses and farms. Nothing drives a loyal customer base like feeling you know the people producing the goods your purchasing, and I'd like to believe this Farm Crawl video is a perfect example of that... even without a lav mic or tripod : )
Labels: Blue Gate Farm Coyote Run Farm Farm Crawl Farmers Market Iowa Local Food reichert's dairy air Sustainable Farming