One of the few topics that comes naturally to me is history. My Dad is a bit of a history nerd and after childhood full of museums and presidential trivia I passively became infected with the passion for yesteryear. Seems fitting that I've worked on a handful of historical documentaries.

Recently, the Foundation made a decision to hold a major banquet at Iowa State's newly renovated State Gym, and as part of the program for the evening, I was tasked to dig up some history on the facility. I got really excited and contacted the ISU Special Collections Department to see what they have on the old gym. Turns out quite a bit. 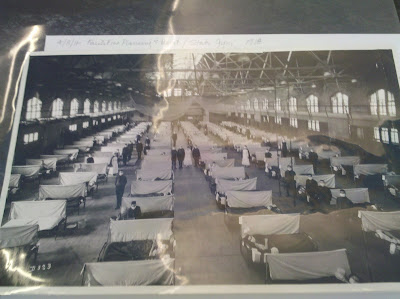 Above is a picture of the Iowa State COLLEGE State Gym circa 1918. Built in 1913 and opened in 1914, the State Gym was at one point considered "one of the finest gyms west of the Mississippi." The State Gymnasium was the first multi-purpose gym on campus. It housed two basketball courts, a suspended track, a swimming pool, a basement level dirt-covered indoor track, and the entire athletics department (consisting of 11 people at the time). In the picture above the gym is being used as a temporary hospital durin a flu epidemic. What does it look like now?

(I did not produce this video) 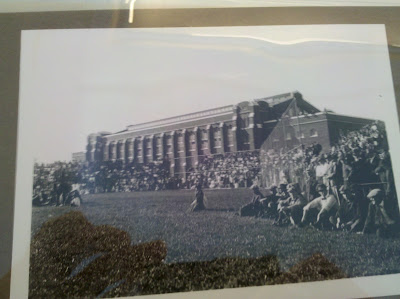 I absolutely love random historical facts like this. Everyone knows the history of Christopher Columbus , the Civil War and World War 2, very few know the history of the oldest building in their town.

Obviously this project is in the very beginning stages, I took these pictures with my cellphone this morning. Even if the end product winds up being 2-3 minutes long, I'm excited to put this puppy together. Who knows, maybe I'll go rogue and make a 30 minute directors cut on athletic history at Iowa State. Look for a late September release!
Labels: Athletics Documentary History Iowa State College Iowa State University Iowa State University Foundation ISU Archives Special Collections Department State Gym