Social Campaigns Should Be No-Brainers 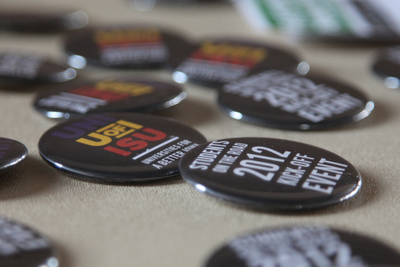 Last night I filmed an ISU student event at the Iowa State Fairgrounds, "Universities for a Better Iowa." The short and sweet is students from all three major Iowa universities have banded together with the Governor's office and the State Board of Regents to lobby legislators to either increase higher ed spending, stop state funding cuts and/or slow funding cuts. Obviously the preferred action would be the increased funding. There were roughly 300 people attending, mostly made up of students, and over half of them were University of Northern Iowa students. If you know anything about what's been going on at UNI you know they've been dealing with cuts in hard fashion recently.

Considering my employer and as a product of a public university - Go Cylones! - I am absolutely on board with their mission. The problem is they are going about it in a very old fashion way; Public events, state tour, lobbying at the state capitol building... These are all smart ideas and basic grassroots campaigning, but they have the potential be forgotten as soon as the sun goes down. Where is the public support and outcry? How about a little 21st Century outreach? Last night's event started as I would advise any large gathering to start, with a short program video introducing the groups ideals and mission. Shortly thereafter the student emcee mentioned the group's Facebook page. One mention. No mention of the groups Twitter page and no personal website period. Also, considering my affinity for the power of online video, U4BI has made the tragic mystic of not putting their video on YouTube. Give supporters something to push online!

If these students, or any orgranization, want to plant an idea in the mind of their audience they to reduce their message to an easy take home and establish a foolproof next step for that audience. Setting up a social media presence is a no-brainer, what to do with those pages is the real issue. Twitter and Facebook pages need to have content that inspires people to share. Videos, hashtags, photos, blog posts, inspiring quotes... something. 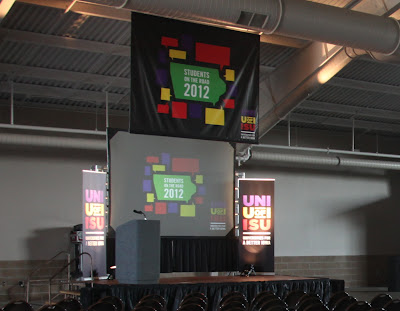 Looking at the physical media U4BI had at last night's event you can tell someone has been spending some serious time on public image and the most ugly, necessary evil marketing term, branding, but these materials just look nice, they don't tell you to do anything. How about a hashtag? Where's your weblink? Why not tell attendees to tweet the event or ask questions via twitter to turn the evening into a forum, instead of a stale speaking engagement.

I don't mean to sound nasty, but there is a reason the Governor and most of the local affiliates left after 20 minutes of a 45 minute program. You have a captive audience, your speakers are saying some great stuff, but half the room is advocates. Utilize the whole room, not just the podium.

Lucky for these kids, they've only just begun their mission. They still have time to amp up their momentum and push their passion to the masses. Beyond this example there is a take home for anyone starting a publicity campaign. You have a message, you know the mediums, now just figure out how to get the most out of both.
Labels: Advocacy Call to Action Facebook Iowa State University Public Campaign Social media Twitter UNI University of Iowa University of Northern Iowa YouTube