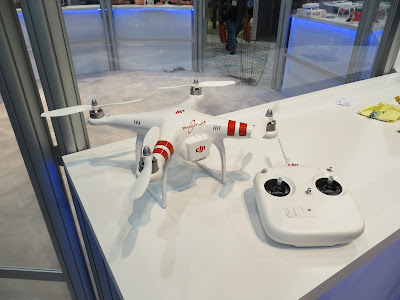 If such a thing as the “ethics of war” exists, the modern fringe is defined by unmanned aerial vehicles, more commonly known as “drones.” Besides spying on people, keeping pilots out of the sky and being extremely efficient killing machines, drones have another trait — they’re really cool.

Before you get upset and label me a warmonger, tell me, if you had the chance to pilot one of these overgrown remote-control planes from your backyard, would you? Two weeks ago, I attended the 2013 National Association of Broadcasters conference. One of the more popular camera toys I got to play with were remote-control helicopters mounted with high-definition cameras. Companies such as DJI, Rotor Concept, Freefly and many more filled the exhibit hall airways with innovations. While I stood in line with thousands of conference attendees, anxiously awaiting my turn to pilot a drone, I heard plenty of “oohs” and “ahs,” yet not a single concern over domestic espionage.

Ranging in size from small clock radios to oversized lawn mowers, helicopter drones are actually quite reasonably priced. DJI’s Phantom Quadcopter sells for just under $700 and carries the popular action sports GoPro Hero camera, whereas a Cinestar Octocopter starts at $3,500 and can carry a Red Epic (the cameras used to film “The Hobbit”).

Beyond the cool factor, many of these personal drones come with features that make them almost “must-buys,” including GPS, autopilot functionality, anti-crash technology, auto “go home and land” features and much more.

While the military paradigm might make drones seem terrifying, could it be they are simply misunderstood gadgets? Like the Internet and satellite technology before it, maybe drones need only to enter our homes before we accept their potential — for good and evil. CV

For a little Fire-Wired Life exclusive, here's a little video I shot flying a DJI Phantom around my neighborhood with a GoPro Hero 2 attached.