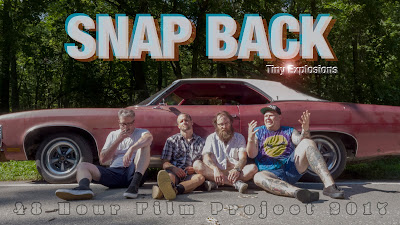 For Tiny Explosions' 6th bout in the Des Moines 48 Hour Film Project we lucked into the opportunity to make either a "Road Movie" or Sci-Fi short. We decided to kind of do both, and the result was a film worthy of screening, titled Snap Back.

While we did screen at Best of City this year, we didn't win any awards. A head-scratcher because why would our film screen again if it didn't receive any specific acclaim? Maybe we Being There'd ourselves. In the long run awards (outside of the overall winner or runner-up) are no big deal as you don't know how the judges graded and the recipients are almost always puzzling. As an example a couple of Tiny Explosions' past award wins have been confusing. The important thing is we're all exceptionally proud of the film and I don't think there was a short in the competition that looked better or took more chances than ours.

After the dust settles on a 48HFP period I've always found it rewarding to look and deciper what worked, where we over-reached, and share a few insights that no one will otherwise know and (let's face it) they probably don't care about as well.


First, I think Tiny Explosions has figured out how to make the most of our Friday night brainstorm. While most teams write with a small crew of trusted friends and crew; we write amidst a party-like atmosphere. Every year our writers room has been somewhere between a dozen and 20 people shouting ideas and basically plowing through the writing process like a marching band through a nursing home. At times it has been too much, but I think we've finally established a process to uncover our best idea. The general guidelines for our writing process currently consists of:
This process has generated both Almighty Haul and Snap Back; our last two films which depending on who you ask on our team are a coin-flip over which is better.

Second, shoot in one location if possible, and only shoot outdoors if it's the best idea on the table. Two years in a row now we have shot in a single location and it has lead to our fastest shoots and best product. It also had meant shooting outside and risking dehydration. Also, with this year's film being a Road Movie we were kind of forced to driving and filming the same quarter mile stretch about 30-40 times (in a car with no AC). Our film turned out great but I think we were all risking sunstroke, cramping, and serious dehydration. Next year we need to fight for an indoor, commercial or business shooting space.


Finally a little insight into our film... something our team may not even realize. Good storytelling is more than a plot, some gags, and a clever ending. The films I gravitate toward ,and hold in high regard, have a theme, are allegorical, parables, or display strong undercurrent of tone. The last two years I've consciously taken a beat during the outlining process to ask myself what the subtext or theme of our film could possibly be. Well this year I actually had a friend uncover what our short's allegorical thread is. I'm not one who enjoys artists telling me what their work is about, but seeing as this is a short and I am an amateur filmmaker, I'll share.

It's no mistake the loop is broken when the decent characters abandon their jerk friend. I've always been a fan of Tech/Media industry phrase "Fire the Assholes." In every endeavor of my adult life I have sought to cut out the willfully mean, contemptuous people as well as those who suffer from vicious arrested development. Rubber Band Benny is a cipher for this individual. We all know these people. Some we can excise, others are intractable barnacles on the fabric of our professional and social lives. Certainly not the most veiled of parables but something to which I personally subscribe. Of course I am a loud and proud goofball, but I draw the line at having fun at someone else's expense.


So this final thought is not a lesson about filmmaking but a creative goal I will always challenge myself to undertake and hopefully be able to control in a project where you are willfully penned-in by the clock and required elements.

To close the book on Tiny Explosions' 2017 #DM48HFP I'd just like to say while we didn't receive the accolades of years past, I thoroughly enjoyed making this year's film. Once again I've come through this project proud of what our team has achieved and excited to see what we do next. Some of the people riding the Tiny Explosions wagon are my best friends and as long as they are interested, I am more than willing to cast sleep aside and make another 48 Hour Film Project short.

For those looking for a more ridiculous and visual Behind the Scenes experience of Snap Back,  look no further than our YouTube channel and our annual outtakes. See you in 2018.