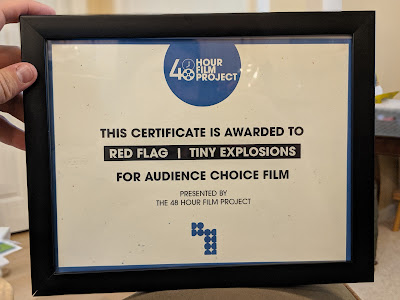 Ladies and Gentlemen, if you would allow me the distinct pleasure to present you; the eighth 48 Hour Film Project short to be released under the Tiny Explosions banner... red flag.


Assuming you watched the film, red flag is easily the most Tiny Explosions-y film of our nine years working together as a crew (nine years in the event, but eighth T.E. film because the engine of our 2012 crew was a good deal of the creative juice behind a 2011 film "Side Effects," by Team Mystery Box). For an explanation of why red flag is basically Tiny Explosions plutonium look no further than; our ensemble of actors, absurd characters, producing ridiculous things for the movie screen, tons of big laughs, some truly gross out moments, improv style comedy, characters sitting and talking, and Brian Hogan willing to do something spit-take worthy for the greater good. 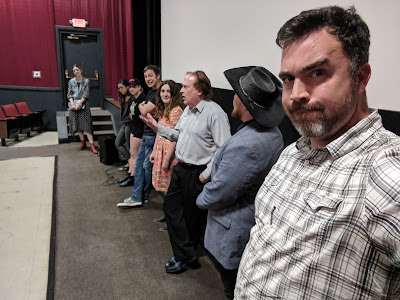 No need to rehash my feelings on 48HFP awards or how films like ours get handled by judges. So I'll skip over that and instead give you my favorite films of 2019.

My personal favorites this year:
As the end of August sneaks up on us, the 2019 48HFP season is over. Tiny Explosions may produce something in the interim 48 weeks, but we all have lives and there is a good chance we wont play pretend until next July when 48HFP 2020 rolls around. Should that be the case, allow me to ruminate on Tiny Explosions years passed, present, and future.

Starting in 2016 I implemented two safe guards to make sure we're delivering something resembling our best work; my personal list of filmmaking goals and positive brainstorming.


Friday night is the most important part of the 48 process, it is where the decision making happens. Some teams have a single person or core team of 3-5 people who develop and write their film. Tiny Explosions does not, Friday is basically a party. This year we had less than 10 people, but there have been years where we were close to 20 people throwing ideas on our whiteboard. The first four years of our 48 experiences, these experiences were a little... tense. Lots of ideas were thrown out and immediately people were crapping all over them.

In order to make sure the best idea gets its chance to be fleshed out, I've forced Tiny Explosions to follow the basic principals of Positive Brainstorming. For the first hour or so of the evening, everyone is welcome to share their idea for our project and no one is allowed to criticize or pick apart the idea. You can praise, build upon, or inquire about a concept or pitch, but no denigration. I've discussed the minutiae of this before, but staying positive and working together is the important lesson. 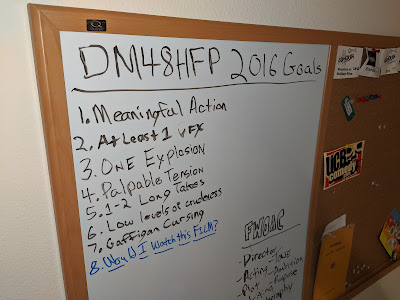 Finally, the personal part of the postmortem, "What does Pat want out of this project next year?"  Well since the 2015 48 Hour Film Project I have kept the list pictured above on my basement wall, right by my desk. It is an ever-present reminder to not enter into any project just completely doe-eyed and expecting the best. Unguided collaborative efforts have a tendency to devolve into group think, driven by unclear vision and zero purpose (i.e. the loudest voice wins). So here's my annual update to the list based off of what's been driving my cinematic interests and other filmmakers' works I'm -best way to put this- jealous of.

Pat's 2020 48HFP Filmmaking Goals:
A few hold overs from the previous list, a few no-brainer additions. We have over done sitting and talking. we need to continue working on action that serves each character's purpose and keep them meaningful to the plot and style. Nine years and not one explosion? Cross-fades and montages are gimmicks. Cursing is a lazy crutch that can easily undermine your intentions. The two big time additions are tension and mobile camera.

Five years Tiny Explosions has been using gimbals in our 48 Hour shorts and we have yet to make use of their full potential. Subtext, a definite standout film from this year's competition, had a perfect gimbal shot. Since 2015 I've been pushing ideas with the driving force being the potential for this very shot; suspenseful, leading lines, foreboding lighting, etc. I mean that shot is straight out of Mindhunter or Zodiak, I can't get enough of it. I'm straight up jealous they got to it first. Bravo to Thai and Igor's Sophomore Slump.

Last thought of the day, Tiny Explosions really wanted horror this year. Hogan is a horror superfan and I love the potential for disturbing tension, but alas we didn't pull it out of the hat. Tiny Explosions is willing to bastardize a genre, but as of yet, we haven't come up with something worthy of sneaking in a horror thread. When we do, I can't wait to pull some Chekov's Gun business like the hay fork in The Crazies scene. That trailing shot of the bloody fork is just terrifying. Can't wait to get our chance to do something like that.


Okay, that is a lot of babble for a 48 follow-up post. If you've watched it, I hope you enjoyed red flag. If you have yet to press play, my advice is not to be eating whilst viewing. Still the best weekend of the year, can't wait to do it again.
Labels: #DM48HFP 48 Hour Film Project Brian Hogan Comedy Des Moines Filmmaking Positive Brainstorming Project Management Tiny Explosions