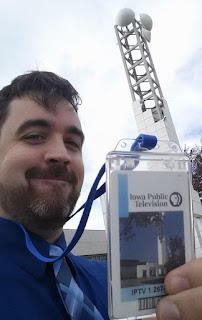 This is me, day one on the job at Iowa Public Television. That was November 7, 2014. How has five years gone so fast?

I am a big time believer in "time flies when you're having fun." While one of the major downsides to believing happiness is the most important element in your life, there's no legitimate reason to complain about being happy?

Over the course of five years I've filmed the four corners of the state, directed a bunch of television shows, learned some fun camera tricks, met the President, met countless people who could be president, dressed up as a robotic monkey and danced around on live television, gone on all kinds of outdoor adventures for work, traveled to California for a documentary, met dozens of Iowa filmmakers and talked shop with them, and plenty of other things I'm omitting to keep this list from getting out of control.

I REALLY love my job and I love the work I'm allowed to produce. Not every day is cupcakes and confetti, but most of the time I find myself keeping my mouth shut around other people talking about their jobs because I get paid to do and share awesome stuff.

Since this is my blog, and I'm not bragging to anyone specifically, here is a favorite piece I produced from each of the five years I've work at IPTV.


One of the no-brainer productions IPTV does is high school girls sports championships. All of the sports have their charm but basketball is definitely my favorite. My first year I was asked to produce a piece on the Harlan girls team who was tearing through the field en route to back-to-back championships and undefeated seasons. With the energy and enthusiasm this crew brought to the piece, it was way too easy to produce. Added bonus, I had the time to score the feature as well.

For the first season of the Kids Clubhouse I volunteered some of my time to help produce the show. I produced five features that year and got to use my gimbal camera to liven them up. I had a lot of fun using old silly transitions and meeting a boatload of kids. This was probably my favorite feature of the year because the topic is just goofy but also I had great success coaching pre-schoolers to talk on camera. It's a pretty quick piece but fun and different. I miss working on the kids clubhouse, but I don't have the time anymore.

Alternate favorites from 2016: High School Bowling (probably my actual single feature favorite, but Pigs as Pets is a good example of the year and Clubhouse work. Also showcasing two sports in a row seems lame.),  Ice Carving at the Fair


Literally the year I started working at IPTV I said I was done with the fair. I was tired of walking around a crowd second rate theme park, eating the same expensive food, doing the same uninteresting things I did every other year. Well my experience filming the fair for IPTV turned that around 540 degrees. The Fair is full of great fun, sometimes you just need to look for it. In 2017 I produced something I might have been born to cover, the hot dog eating contest. The gentlemen running the show set it up perfectly. I remember laughing in excitement while cutting this piece because it was just so farce-tastic. I still get a smile watching it.


The Importance of Freshwater Mussels - Iowa Land and Sky 2018

2018 is a hard year to pick a favorite from, there are so many personal favorites from Iowa Outdoors, but I pretty much have to pick this mussels feature from Iowa Land and Sky. This project was awesome. I got my drone license, I worked closely with our Education Department, I learned an incredible amount about Iowa's ecosystem, I droned all over the state, met some incredibly cool people that I hope to continue to collaborate with, and I truly think it is something everyone should watch. The alternate choices here were hard to pass by.

It has been hard not to pick an Iowa Outdoors story for every year. This show was reason numero uno I was excited to apply for the gig. I love the outdoors and I was super eager to get out and share what it has to offer. It is shocking how many Iowans no nothing about the state outside of their town. Northeast Iowa is an absolute treasure and filming this kayaking event was marked on my calendar in bold, permanent marker. Not only did it live up to everything I wanted it to be, but as I was gliding down the river I spent a good amount of time thinking about how fortunate and privileged I am to do what I am doing and be where I am at. Sure I've worked hard but I also caught a fair amount of breaks. Nothing helps you take stock of your situation than the quiet, peaceful, and truly right-sizing experience of paddling a kayak down a big river surrounded by beautiful bluffs. Loved shooting it, proud to have shared it.

So five years-in I've produced over 200 elements for broadcast (plus online) and directed I don't know how many hours of television. It's pretty awesome to know the work I've done is shareable and I will always be able to look back at it. A couple of things I'm looking forward to in the immediate future include working a little more on The Film Lounge, a documentary I travelled to California for in October, more Trail-in-a-Minute filming, Iowa Outdoors of course, and just the mystery of new work. Who knows what I'll be sharing on here at the 10-year mark.
Labels: Basketball Career Director Gimbal Iowa Outdoors Iowa Public Television Iowa State Fair Kids Clubhouse Producer TV