Update: As was expected, The 2020 Snake Alley Festival of Film has been delayed due to Covid-19 concerns. No dates have been set, but the hope is now for the fall. Seeing as the USA is not New Zealand (where they made the hard choices and have effectively eradicated the virus), I'd call that optimistic. I guess the old saying is right; you can lead a country to quarantine but you can't make it shelter in place. I'll update again when there is more share.

I am excited.
Last fall, I got the lightning strike idea that I needed to adapt a story my Grandmother wrote as a child into a screenplay. That may sound slight, but this story is incredible; it is the story of my Great Grandmother Martha Adams giving birth during the German invasion of Belgium in World War I, followed by her braving the war, losing her husband, remarrying and moving to Illinois, and then personal trials galore up until her death in 1976. It is a story that would make Scarlett O'Hara say "Thank goodness, that's not me."
The story –pictured above– has been a bit of a sacred text in our family since my Grandmother wrote it. Her teacher was fascinated by it. Seeing as the entire thing is only four pages, I've read it several times throughout my life and with each passing decade i've become more and more astonished by the story and the storytelling therein.  My Grandma has given copies of it to pretty much anyone who is interested and seeing as she is turning 95 this year, it feels right to keep this story going and maybe... just maybe, turn into something more.
So this past November I called my grandma and asked for her permission to adapt the first page of her mother's story into a short film. She was impressed that I was interested in undertaking the project and had a few requests for me should I go beyond the first page, Ultimately she gave her blessing. So after a couple weeks of fleet fingered writing "A Widow's Might" was complete. Cut to today where the screenplay has been accepted by the Snake Alley Film Festival in Burlington, Iowa as a finalist for their screenwriting contest and is set for a live table read come late July. 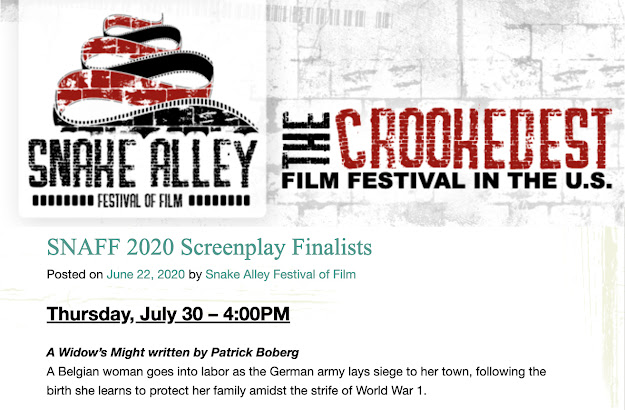 I have written a handful of feature film screenplays and dozens of short film screenplays, having only submitted a few to contests. I never truly saw the point in such an endeavor as I am much more interested in producing the actual film. The problem is all too often the material I write steps beyond what I can feasibly produce without serious funding. Sadly, A Widow's Might is such a project seeing as it would require a size-able cast, period clothing, and small battle field sequences.
Stuck behind the feasibility wall, my enthusiasm for A Widow's Might started to fade over the winter. That is until I found out finalists in SNAFF's screenwriting competition received a live table read at the festival. Such a cool idea. Why don't all film festivals do this? I guess I could pull together a table read myself, but there's only so much time when you've got young kids, a career, you're trying to sell your house, and you have another kid on the way.
So I submitted the screenplay back in January and just this week I found out the screenplay was accepted and will have a table read on Thursday, July 30th at the Capitol Theater in Burlington. 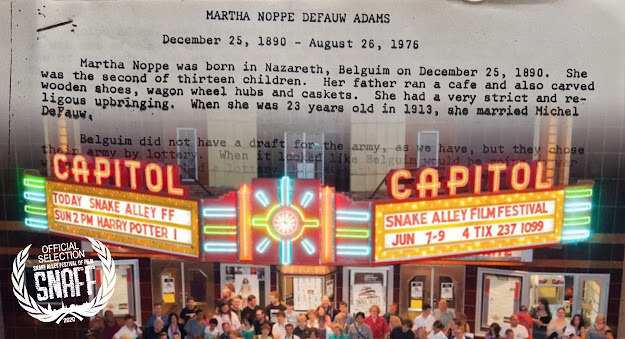 Of course when I submitted, Covid-19 wasn't a front burner concern in the US and my hope was to invite my family down to Burlington should the screenplay be accepted. Now, I'm a little hesitant. I will probably go, but I definitely won't ask a 95 year-old to risk her life for the event. Should Covid not cancel the film festival, maybe I can figure out a livestream or recording situation to share it with my family. But even if not, being accepted alone is exciting. And once Covid-19 becomes a thing of the past, hopefully then we can share part of my great grandother's story with the world.
Labels: A Widow's Might Burlington Family Film Filmmaking Screenplay Snake Alley Film Festival Submission writing