The Side Effects of 48 Hour Film Project 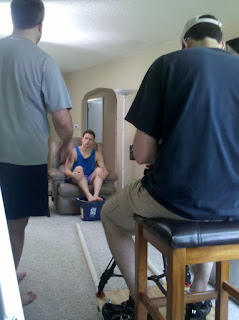 This past weekend I took part in an annual event I've been dying to do for years now; the 48 Hour Film Project. The premise is pretty simple. You form a team of filmmakers, Friday you pull a genre out of a hat, the 48 Hour organizers give you a line of dialogue, a character, and a prop and you have the next  48 hours to make your film.
I've been missing the boat on this deal for years and considering I have an unhealthy obsession with movies and multimedia... that's not cool.
So the team I was so kindly invited to join, Team Mystery Box, pulled "Superhero" for our genre. Friday was sputtering brainstorm session and late night blitzkrieg writing session, Saturday was nonstop filming, and Sunday was putting it altogether. My roles were brainstorming, writing, music composition and minor production work and editing.

I don't want to spoil the film for you incase you see it but I will tell you it's called Side Effects and it's about a guy who buys an "Enhancement Kit" which gives him the brief experience of having superpowers. The group wanted to make it a comedy... but it didn't exactly turn out that way.
In the end it turned out really cool. Thanks to my professional Director of Photography friend Aaron Riggs, cinematography is outstanding and the music I wrote, no gloating intended, compliments the film great. I have officially got the film making bug. Next July can't come soon enough... I think it's time to sit down and finish one of the many screenplays I've half-written.
Labels: 48 Hour Film Project Aaron Riggs Filmmaking Music Scoring