The Spectre of Job Perks

When I blog about my 9-5 I tend to talk about the perks; interviewing someone cool, filming something people might be jealous of, getting into sporting events free... 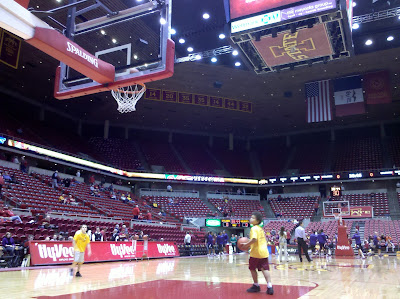 For the most part I get to do some cool stuff because of the nature of my work. Some things I get to cover I assume are going to be cool but end up being something entirely different. Welcome to today. 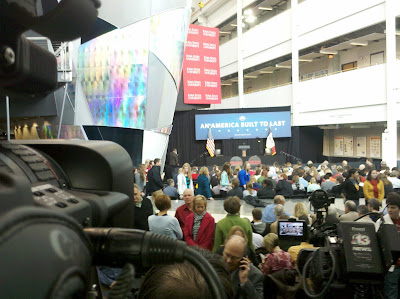 This morning I set up shop at 9:30 a.m. in the atrium of Howe Hall for a town hall meeting featuring the Vice President of the United States, Joe Biden. I was sent to film the event and the University's President interacting with him. Well the VP's people didn't want every camera man gumming up the works so during the time when Biden and Leath were together there were only 2 cameras allowed to film them, one from the news affiliates, one from the University. I let the College of Engineering guy take the University position. What I didn't realize was my choice doomed me to standing in place for 3 straight hours.

From 9:30 to 11:45 nothing happened. People sat and chatted, music played and I stood uncomfortable in a 3 square foot area in the back of the room. Finally, after that 2 hour test of will the Vice President came out with a student representative and Former Iowa Governor, current Secretary of Agriculture, Tom Vilsack. What followed was roughly 90 minutes of political conjecture. I was intrigued by the content but my legs were very displeased. 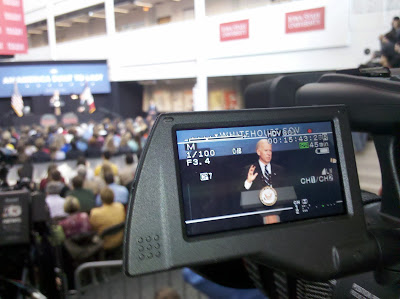 Vice President Biden gave a speech, answered some questions and generally came off as an intelligent and likeable guy. He ISU a lot of credit for its research and innovation and said that whatever country figures out Green technology first will win the race and Iowa State is a major boost to the United States chances. Being someone who loves green initiatives and sustainability I dug that.

My thighs and feet couldn't have cared less. When I finally collapsed my gear and got out of Howe my legs felt like cuts of meat that had been curing in the sun for two weeks. Sitting here now hours later I still feel like my legs need an oil change. So while I love bragging about the cool stuff I get to do thanks to being a guy with a camera, there are some serious down sides. Now if you excuse I think I'm gonna go stretch for a 45 to 60 minutes.
Labels: College of Engineering Film Howe Hall Iowa State Joe Biden Vice President Videography