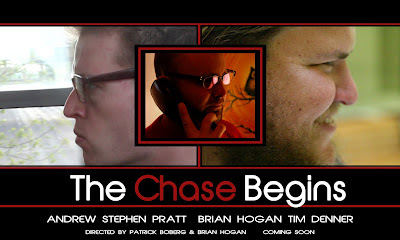 Take Five guys, six hours, a camera, a boom mic, stir and what do you get? A 5 minute suspense-thriller we dubbed "The Chase Begins." If you've checked out my personal blog before you know I'm a bit of a film fanatic. I've reviewed films, I've scored them, and FINALLY! I'm making them. Since January I've made two short films with my longtime friend Brian Hogan. In January we made "Master of Puppets," an absurd dark comedy showcasing the seedy underbelly of the puppet world, and just this weekend we shot the afore mentioned  "The Chase Begins." What was the impetus? Our mutual starving artist actor friend, Andrew Stephen Pratt, was back in town for a couple days from NYC, so of course we took advantage of his talents and grabbed my camera.

Without giving too much away I'll say the movie is pretty much a long chase sequence. I doubt I'll ever make a feature length film, but right now, I'm in love with short, guerrilla films. For those who don't know Guerrilla Filmmaking is a method I discovered through Robert Rodriguez's indie flick, "Desperado." TCB was shot in 6 hours, with no lighting but the sun and a few lamps, and no true script. Sound like something you'd be interested in trying? Watch part one of Rodriguez's "10 Minute Film School."

Exciting stuff huh? Well I won't go on much longer, only to say that if you're interested in seeing "The Chase Begins" you're in luck. Brian and I hope to score the movie this weekend and upload it to YouTube before the end of the month.
Labels: Andrew Stephen Pratt Brian Hogan Guerrilla Filmmaking Master of Puppets Robert Rodriguez Short Films The Chase Begins