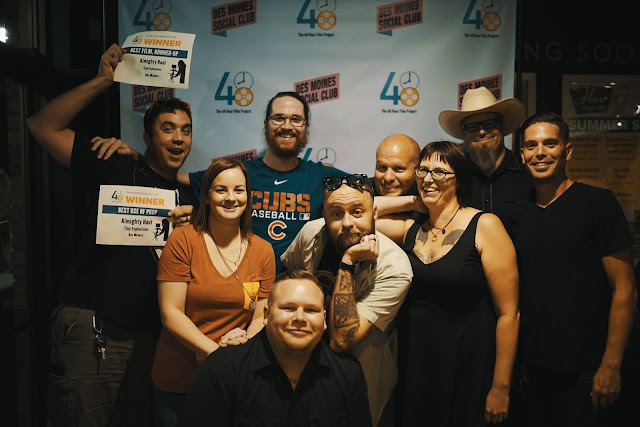 One year ago the 48 Hour Film Project left a bad taste in my mouth. Our film came in below my expectations, we missed out on best of city, and I found myself considering forgoing the 2016 competition. Thank goodness we didn't because this year's film turned out to not only be our best yet, it ended up winning the runner-up best film prize for the entire Des Moines 48 Hour Film Project.

Occasionally I refer to myself as a filmmaker and for the most part I've never really felt comfortable with the term. First off, I've never actually shot with film, but mostly I've never really felt anything I've produced could be considered a narrative or production close to the term. Most of our previous 48 Hour Film project shorts have decent stories and acting but none of the productions really came together to what I would consider a "film." This year I think we've come as close to hitting that nail as we ever have. The film was shot uniquely, has a narrative propulsion that is engaging, the acting reaches beyond bit or "sketch" humor, and there is the potential for re-watching.

I'm really proud of what we achieved. In the end "Almighty Haul" took home the Des Moines competition silver medal, the Best Use of Prop award, and the Audience Award for Screening Group A.  That is a huge jump from last year where our film didn't receive any accolades and missed out on the Best of City screening. This year was easily the most representative of what I hope a collaborative process could be from a 48 team. We had a huge group of writers, who threw out a ton ideas, and yet we still were able to stay positive and pick our best idea. From writers-to-cast-to-crew this film year was a success in every imaginable way.