Wrapping up Season 8 of Iowa Outdoors 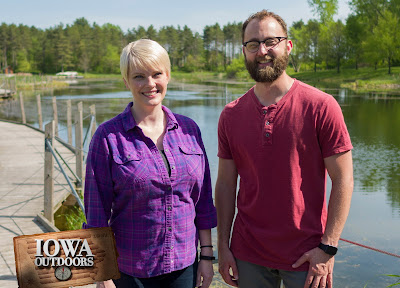 Tonight marks the 29th episode of Iowa Outdoors for which I have been a producer; and yes, do I ever wish that was a beautifully round 30, but as Mick said 'you can't always get what you want."

As of 6:57pm tonight, Iowa Outdoors has aired eight full seasons of programming. While I only started at IPTV in November 2014, I've been a fan of the show since it's second season. I love the outdoors and from the moment I saw a producer position for Iowa Outdoors was open I knew I was gonna get that job. Maybe that's arrogant but I prefer to think of it as star-crossed confidence. I'm a former boy scout, I love all outdoors experiences, and I make sure to include outdoor adventures in every vacation I take. So yeah, I had the skill and the drive so I was bound and determined to get the gig.

Four years and three full seasons in, Iowa Outdoors has been everything I hoped it would be and more. I've covered fishing stories, hiking stories, conservation stories, adventurous stories, you name it I've covered it or plan to. I created and produce a virtual trail hiking feature. I wrote, performed, and recorded a music refresh for the program starting in season 7. And this season I personally shot and produced roughly half of the features that hit the airwaves. I love this show.

In place of writing a 4,000 word essay espousing my love for this program, how about some links? Here are a few of my favorite features from season eight producing for Iowa Outdoors.