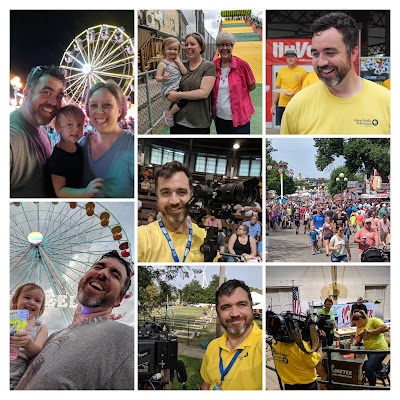 For the fifth time I have worked the Iowa State Fair as an Iowa Public Television producer. A lot has changed since I declared I never wanted to go to the Fair again, back in 2013. Now I love the Fair and look forward to grabbing my camera and telling the wacky stories I'm handed each year.

Since my first IPTV Fair in 2015, I have been identified as the "fun" features producer. I tend to lean into upbeat, rocking music, and to cut kinetic stories. This year that reputation garnered me four really fun contests to cover; Monster Arm Wrestling, Doubles Horseshoe Pitching, Bubblegum Blowing, and Pie Eating. Quite the awesome rundown if you ask me. For ease of viewing, here are the four videos.

I was considering taking a more meditative approach and pacing to my Fair features this year, but when my first interview -Mother Monster- just amped up the fun in her answers... that was just a low and hanging fastball right over the plate.

While not a perfect four-some (there were some editing snafus that required some in-delicate fixes without my supervision), I did have a genuinely great time working and attending the Fair this year. Maybe next summer I'll ask for a bigger workload and see if I can produce twice as many stories. Or maybe not, having a little breathing room might be the ticket to maintaining ones sanity during the biggest event in the state.
Labels: 2019 Iowa Public Television Iowa State Fair Monster Arm Wrestling TV Production