100 Hours racing around the Family Tree

11 months ago Tiny Explosions produced Family Tree as part of filmracing.com's 100 Hour Film Race, and after it's "festival run" here it is!

Following the production and release of Red Flag, Hogan and I felt the sting to keep going. Not wait another year to make a short as we had been doing as of late. I love the 48 Hour Film Project as it allows all your collaborators to lock off a weekend, write-shoot-produce a short, and then see it on the big screen a couple weeks later. The 100 Hour Film Race is similar except you get double the time and it screens at the Film Racing home base in Atlanta, so the team didn't get a chance to see it on the big screen. And of course due to the pandemic, we never did.

So instead of just saying "Hey, we made that" and let it hit the internet –KER-SPLAT– I entered it in a bunch of Iowa film festivals. It was programmed in a handful, won an award in one, and even had an in-person screening at the Des Moines Underground Film Festival. The DMUFF was actually a drive in this year, and sadly I wasn't able to attend (really bummed about that). But even though we never got the 100 foot cinematic experience I wanted for the team, I'm still really proud to call it a Tiny Explosions short. 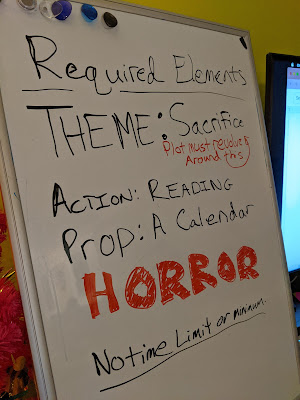 The 100 hour film race required a theme of sacrifice, an action of reading, and a prop of a calendar. Other than that we were free to do whatever we wanted, for as long as we wanted. Hogan and I had been talking about doing a horror film for quite a while so we had that set and come the Thursday night writing session we brainstormed a ton of ideas. I believe it was Chuck Lines who pitched the evil Christmas tree that needed to be fed blood idea. I jumped on it and got rolling. The next 100 hours were our most involved production to date. We shot over the course of 2 days, 8-10 hours each day, and as per our usual operation, we included every exploder that wanted in. When you tally up everyone that appears it might be our largest cast.

Family Tree is a pretty much a b-horror comedy. During the brainstorming a good portion of the team got cold feet about making something that wasn't a comedy, so I acquiesced. I tried to make it a bit of a satire-allegory for entering into a marriage with less than a clear understanding of what another person is expecting you to give up. Family Tree is a good short that ventures into broad comedy, too many kills, and not enough tension or scares, but still I reeeeeaaaalllly like the idea. Are there things I would change? Most definitely, but not the premise, not a good portion of the production, and most definitely not the final shot. I'm not a b-horror guy, but I think Family Tree claws just beyond those boundaries and that's where I love it. In fact, I'm using the evil tree and the marriage premise to write a feature that I think I could produce myself.

One of the best part of Tiny Explosions is the time spent with friends, having fun and big laughs at the things we pull off. This year the blood gags and kills really provided some good laughs. It also caused some near vomiting on set, particularly when I was spitting up blood. Managing the tree was my least favorite part as cedar trees are an invasive species that can cause skin irritations from the oil on their needles. So every time someone picked it up or placed a hand on it you were risking a serious itch and bumps. Thankfully the two we used were free and cutting them down served a good cause of working to rid central Iowa of the cedar invasion. Thank you to Polk County Conservation for allowing us to use their Cedar's for Celebration event in the film and take a couple trees for props.

As someone who helps program a short film showcase I will be the first to say Family Tree is imperfect, but that is okay. It could've used a second draft and the cast could've been halved but juggling life and filmmaking is always hard with a young family. Production wise, I decided to start shooting in 2.39:1 or 2.35:1 aspect ratios after seeing Parasite and just loving the look and expansive frame. Anamorphic frames really force the filmmaker to build a scene and not just point and shoot. The blood gags were all tailored to the part of the story, and some of them could have been improved. Particularly my death scene, but it was hard to express my idea without setting the shot and sharing the idea with the crew. And working with practical effects many shots are one-and-done situations unless you have a good deal of duplicate wardrobe and endless time. That won't happen again going forward as not actualizing the proper shot can be the difference between a wasted scene and a standout moment in a project. 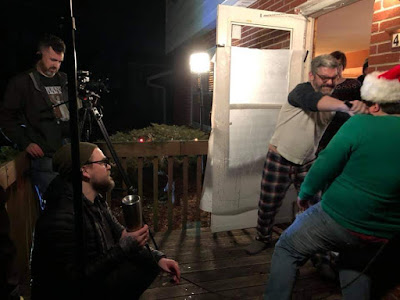 I need to thank Jo Schultz for letting us turn her into a serial murderer, splatter her in fake blood, and run her all over town. As always, the entire cast and crew also did great, but newcomer Jakob Nelson really made the blood gags possible and authentic. He really upped our game and I am forever grateful for his expertise in guiding our work. Finally, thank you to old friend Jill McLain for taking on a large supporting role even though she felt like complete crap and probably should've spent the weekend sleeping and not worrying about a blood-thirsty tree.
That's the thing, these shorts are a learning experience and including everyone in the fun that wants too is central to the ethos of Tiny Explosions. Should I ever produce the feature film iteration of Family Tree, hopefully I can iron out the elements that curve the path of the piece.
Labels: Blood Christmas Family Tree Film Racing Filmmaking Horror Jakob Nelson Jolene Schultz Murder