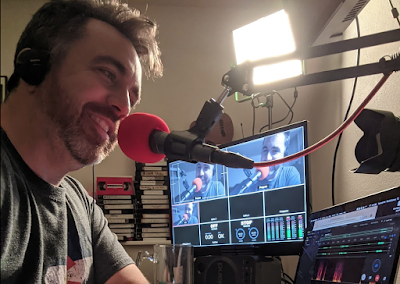 Believe it or not, 2020 has been a really fun year for me when it comes to filmmaking. Tiny Explosions released six short films, I wrote four short film screenplays, one of those screenplays was accepted into the Snake Alley Festival of Film (of course, Covid-19 put a real damper on that, but it was the only place I submitted it too so ya know... Woohoo!), we won a few awards along the way, I started writing a bunch of promising feature length scripts, and then finally, I guested on a podcast that I really enjoy.

The Cinematic Heartland podcast is produced and hosted by Kevin Isaacson of I Like Ike Films, a North-Central Iowa filmmaker who within the last five years has produced a nice run of short films and feature film. He is a really down to Earth guy and an easy person to hold a conversation with. It was a real treat to talk about my year in film, how I got interested in storytelling, and an opportunity to promote The Film Lounge.

If you have an hour, I suggest to give my episode a listen and if you like the show, subscribe and listen in weekly to other filmmakers running down the dream of making films.
Labels: Filmmaking I Like Ike Films Kevin Isaacson Podcast Short Film Tiny Explosions